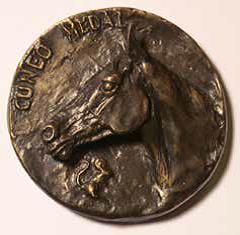 Every year the Cuneo Medal is awarded to a Full Member exhibiting at the Horse in Art exhibition for the “most meritorious group of works”. It is the Society’s Most prestigious award and the winner is selected by the Full Members of the Society who are present at the exhibition to vote.

The medal is named to commemorate Sir Terence Cuneo OBE CVO, the first President of the SEA. Terence Cuneo was the official artist for the Coronation of Queen Elizabeth II in 1953 – for whom he produced many equestrian portraits. The winner each year is announced at the Private View of the Horse in Art exhibition. The award also entitles the recipient to a seat on the judging panel for the following year’s Horse in Art exhibition and the front cover image for the catalogue.

To read more about past winners of this award click on the available links below.