Summer Exhibition to Horse in Art – smooth as silk

Riding Richard Fahey’s PADDY POWER, Megan Nicholls (daughter of National Hunt Champion Trainer Paul Nicholls) finished third in the DFS Silk Series Lady Riders’ Handicap at Doncaster on 14th September to put herself clear at the top of The Silk Series leaderboard ahead of Nicola Currie in second and Georgia Cox in third.

For winning The Silk Series Megan received The Tufnell Trophy from Wynne Tufnell. The trophy is named in honour of his sister Meriel Tufnell who was the first woman to ride a winner under the rules of racing, at Kempton Park in 1972. Megan received the trophy, designed and kindly donated by Inkerman, along with an original piece by equestrian artist Jane Braithwaite ASEA, that featured the jockeys at the top of The Silk Series table.

The painting was commissioned by Arena Racing Company (ARC) as part of a parallel initiative with the Society of Equestrian Artists that commenced at the Society’s Summer Exhibition at Palace House, Newmarket in July. The work of four artists was shortlisted and put to the Public Vote with the winner being awarded the commission as part of The Silk Series Best Racing Picture by a Female Artist Award. Find out more…

As well as the commission Jane receives a complimentary annual ARC Corporate Membership. She said: “I enjoyed an absolutely fabulous day at Doncaster. ARC were very generous with their hospitality and it was such a pleasure to present the painting, ‘Up for Grabs’, to Megan after such a wonderful performance in The Silk Series.

“Although the vote by Twitter and the subsequent commission have not been without their stresses, I have thoroughly enjoyed the challenge of the whole process.”

Megan has kindly agreed to loan her new artwork to the Society to hang at its main Annual Exhibition – Horse in Art (23rd September to 7th October) at Sally Mitchell’s Gallery in Tuxford, Nottinghamshire.

On winning The Silk Series, Megan Nicholls commented: “I’m delighted to have won The Silk Series, and am really grateful for the opportunity to get such a good ride today. It was pretty close coming into the race, with a few of us able to win, so it was a relief at the finish line! The Silk Series has been a brilliant initiative this summer and given the ladies plenty of opportunities to ride for some new trainers in front of big crowds.”

Jane Braithwaite ASEA – ‘Up for Grabs’ (oil). Commissioned by Arena Racing Company for presentation to the winner of The Silk Series 2017. (NFS) 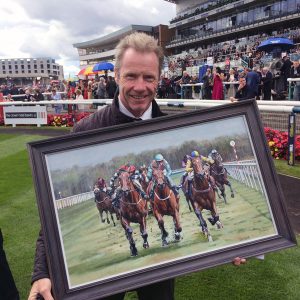 Mick Fitzgerald with Jane Braithwaite’s ‘Up for Grabs’ prior to the The Silk Series presentation at Doncaster Racecourse.

The Silk Series winner Megan Nicholls (left) is presented with ‘Up for Grabs’ by its creator Jane Braithwaite ASEA. The painting commissioned by Arena Racing Company.