The Society of Equestrian Artists (SEA) and the Pony Club UK (PCUK) hosted creative workshops for Pony Club members in February to launch a pilot scheme. 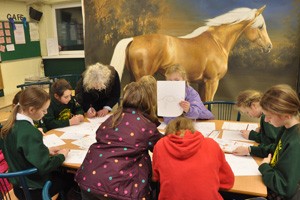 The Witham Villa Pony Club at Witham Villa Equestrian Centre in Leicestershire was the ideal venue for the concept. Classes have been designed to encourage the talent of a younger generation and inspire interest in equestrian art.

The pilot was lead by SEA members Jenny Bell and Laura Barber-Riley who managed three successful hour-long workshops in collaboration with Amelia Morris-Payne, Witham Villa’s PCUK Centre Co-ordinator. The sessions were tailored to age groups of five to eight year olds, nine to 13 year olds and 14 years and older and based on the Jenny’s official PCUK book ‘How to Draw Horses and Ponies’, which focuses on simple techniques to sketch proportions.

Inspiration came in the form of Jenny’s beautiful life-size painting of a palomino pony that was much admired by the children and offered a wonderful, and stimulating, backdrop to the classes. 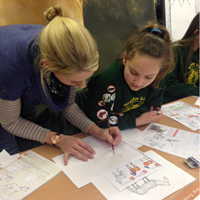 Laura Barber-Riley discusses technique with a member of the group.

The results of the pilot are encouraging with the children engaging and achieving excellent results – there are already plans to follow up with a practical version of the workshops to include a real pony. The eventual objective is to deliver the concept for an Art badge. Much has been learned thanks to the members of Witham Villa and all involved are excited to see the concept develop and grow providing a tremendous opportunity to encourage entries to the SEA’s John King Young Artist Award.