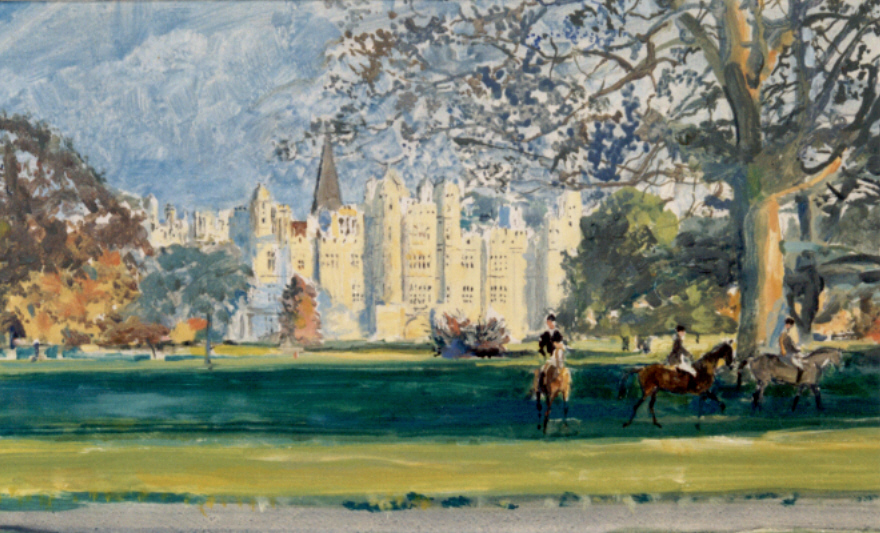 Leigh Parry was born in London and went to St. Martin’s School of Art. He works in oils, watercolours and pastels and has been exhibiting for many years, first showing with the Royal Society of British Artists at the original true RBA gallery in Suffolk Street in 1953, at the Manchester Academy in the same year and at the old Royal Institute of Painters in Watercolours Gallery in Piccadilly one year later.
Leigh Parry is a Senior member and Trustee of the Pastel Society UK (President 1983-1988) initiating the renaissance of that Society during those years after a fallow period; a member of the Society of Equestrian Artists; an Honorary Member of the Pastel Society of Canada and a member of The Royal Society of British Artists being elected to Honorary Treasurer in 1993. He served on the Board of Governors of the Federation of British Artists from 1983-1986. He has received a ‘mention honorable’ at the Paris salon and won a number of awards in the Societies including the Cuneo Medal in the Society of Equestrian Artists, struck in the name of the late President Terence Cuneo CVO OBE and awarded for the most meritorious group of works.
Apart from annual exhibitions with the various societies of which he is a member he has held one man shows in specialist subjects: mountaineering at the Alpine Gallery London, equestrian and travel at the Heritage Gallery Calgary Canada and in the UK at galleries in the Midlands and London covering his journeys to Canada, India, China and Tibet. Additionally he has worked for a number of years with the British Horse Society; he is mentioned in The Dictionary of British Equestrian Artists and is author of articles on equestrian studies.
Group shows include Royal Academy Summer Exhibitions, Royal Cambrian Academy, Paris Salon, The National Gallery of Canada, The New English Art Club and the Discerning Eye at the Mall Galleries London, and for a number of years annually at the Llewellyn Alexander Gallery as well as other London and provincial galleries.
In equestrian art Leigh Parry follows a family tradition which he traces back to his forbear Walter Parry Hodges(1760-1845) whose work was engraved by Henry Alken Senior for the Beaufort Hunt Prints in 1833. Parry himself has been commissioned by the British Horse Society to paint pictures of the Burghley Horse Trials which have been published as Limited Edition Prints-a nice family coincidence in that the Beaufort Hunt has its home at Badminton House and since 1961 the two principle Horse Trials in the UK annual equestrian calendar have been Burghley and Badminton. Private commissions include a series of paintings of their Olympic and other event horses competing at Badminton, Burghley and Chatsworth for the Duke and Duchess of Devonshire.
Work by Leigh Parry is in the possession of such public bodies as the HSBC Bank plc, Singer and Friedlander Bank, Remy Martin, Lincolnshire Museums, Kesteven County Council, Essex County Council, Burghley House, Oundle School, Guy’s Hospital and the British Horse Society.