NOW THERE IS AN OPPORTUNITY TO OWN YOUR OWN UNIQUE HORSE SCULPTURE… World Horse Welfare’s Charity Auction is open and 14 truly unique pieces of equestrian art are open to bids. The online auction closes on November 3 with those bids fed in to the Live Auction (invite only) on November 4 at the BT Tower in London with auctioneer and racing presenter Mike Cattermole. Top bidders will be notified on November 7. FIND OUT MORE…

About the Invisible Horse Trail and SEA artists

The Invisible Horse Trail featured 14 uniquely designed and hand painted 7hh (2ft 4in) sculptures created by world-renowned artists and personalities who took their inspiration from horses that have come to WHW. 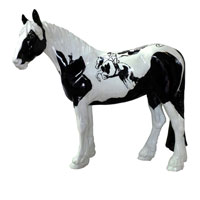 Elizabeth Armstrong SEA:  PIE (IN THE SKY) – abandoned in a field PIE was brought to WHW needing urgent veterinary attention. Slowly he gained weight, condition and confidence, and was eventually backed to ride. Rehomed by Gillian Duckworth he has competed successfully at dressage and won a mini one-day event.

Elizabeth said: “My chosen horse PIE is almost an identical story to that of my horse ROCK ON TOMMY who I rescued from a rag and bone man in Kings Cross from a bike shed.” 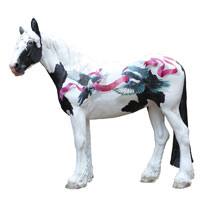 Jennifer Bell SEA: MAGPIE – was part of a group of five abandoned, ponies to arrive at WHW. All in poor condition, MAGPIE was also suffering from a dangerous disease called strangles. Now he has enjoyed some in-hand showing and in 2015 was offered a wild card to the Traditional of the Year Show (TOYS) where he achieved an impressive third place. A real rags to riches story.

Jennifer said: “I chose MAGPIE as my hero; The thing that got me was his amazing recovery and potential for the future, going from an emaciated and neglected youngster to a successful appearance at TOYS. (TOYS is the UK Traditional of the Year Show – an annual national breed show and the culmination of the showing season for Traditional Gypsy Cobs). 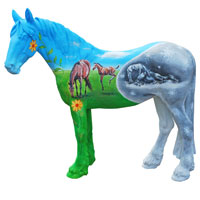 Amy Goodman SEA: MACY and her young foal – both were found frozen and starving in the middle of winter. MACY’s prognosis was not good, but as if she somehow knew these could be her final moments the mare started to rally and got to her feet. MACY’s story is one of WHW’s most-viewed films on YouTube.

Amy said: “When I saw the video of MACY at death’s door, with hypothermia lying in the snow, frozen, with her foal standing near her, I couldn’t help but cry and be touched by their story. To see her months later in amazing health, shows the truly incredible work of World Horse Welfare. 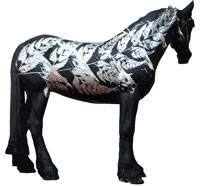 Michelle McCullagh SEA: FERN in a unique collaboration with eventing legend, Sir Mark Todd, FERN – an abandoned Thoroughbred who was rescued by WHW inspired Michelle’s unique design.
Michelle said: “I really wanted to bring Fern’s story to life in a sensitive and emotive way. FERN’s face is not immediately visible beneath the leaves and I hope the sculpture will encourage people to spend a while longer thinking about all of the horses in need of World Horse Welfare’s help. 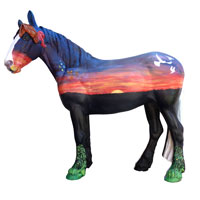 Trudy Redfern – Friend Member   HUCKLEBERRY – an abandoned foal that has already made a TV appearance on BBC Countryfile and made history by being the first horse taken in by WHW under the new Control of Horses Act. His case highlights the dangers of fly-grazing and the threat to both human and equine welfare.

Trudy said: “It is fantastic to help World Horse Welfare in some small way as gratitude for the wonderful work they do. I chose HUCKLEBERRY as my subject because I was reading about him on the train to London on the same day I was asked to participate. My thoughts were of freedom from cruelty and a new life full of hope, showing a contrast with previous bondage and neglect.

The original maquette used WHW’s MACY as its model and was designed by the Badminton Horse Trials Trophy designer Judy Boyt.