Terence Gilbert’s father worked at the National Gallery and as a 12 year old Terence was granted special permission to copy Old Masters and study their techniques. 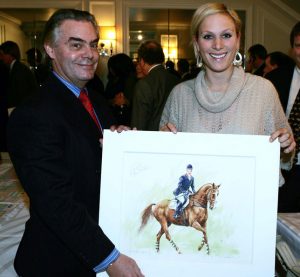 Terence Gilbert presenting one of his works to Zara Tindall MBE

After formal training at Camberwell School of Art he worked as a freelance illustrator, producing film posters, advertisements for airlines and tyre companies and also many book covers with a skill and panache worthy of the finest American artists.

Terence Gilbert’s charm and artistic ability won commissions for portraits of sporting and movie stars. In the 70s he painted Damon Hill, Frankie Dettori, Charlton Heston, the National Guard of Saudi Arabia, Stefan Edberg and Sheikh Mohammed al Maktoum. A showbiz friendship led to a commission in 1985 to paint HM The Queen riding with President Ronald Reagan at Windsor. It was presented to President Reagan at The White House.

He has exhibited in the United States, Saudi Arabia, Oman, Royal College of Art, Society of Equestrian Artists and The Royal Academy Touring Exhibition in Dubai.

His solo show of 36 new paintings at the Osborne Studio Gallery demonstrates that he is a versatile master of many styles. The show runs from 4th to 22nd October 2016 – www.osg.uk.com/