The Art Fund has recently announced that the National Heritage Centre for Horseracing & Sporting Art is one of the five museums that have been selected as finalists for Art Fund Museum of the Year 2017, the world’s largest and most prestigious prize for museums.

The SEA is delighted to be part of this world class tourist attraction by presenting the Society’s Summer Open Exhibition at the venue from July 10 to 16. The winner of the Art Fund Museum of the Year 2017  will be announced on July 5. 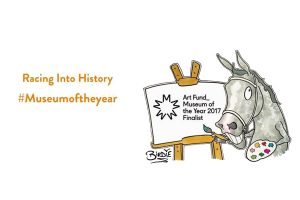 It is a huge accolade for the racing industry that the Museum has been shortlisted, not only because it showcases the wonderfully rich history of the sport but also because it is the first ever sporting museum to have been chosen.

Museum Director Chris Garibaldi said: “We are thrilled and indeed honoured to have been selected as a finalist for Art Fund Museum of the Year 2017. It is recognition of so much hard work on the part of our fantastic staff, volunteers, Trustees and the many supporters who have put their faith in the project over many years… We are about putting the community at the heart of everything we do and celebrating what makes our town and sporting industry unique.”