Terence first honed his artistic skills aged 12 when he got special permission to copy Old Masters at the National Gallery, later completing his formal training at Camberwell College.

He started his career in an advertising studio in the early 60s and after four years progressed as an illustrator working on film posters, magazines and book covers. Clients included BOAC and Dunlop Tyre Company. He did designs for the James Bond film OHMSS and illustrated the film titles for David Copperfield in 1969.

During these years, Terence illustrated many Western book covers. These featured dramatic scenes of horses and riders against the wild rugged scenery of the American West, which lead to the originals being sought by American collectors and the Museum of Western Art in Colorado.By the mid 70s Terence was represented by prominent galleries and received many commissions for Portraits as well as equestrian subjects. Among the Portrait clients at this time were Damon Hill, John Daly, Stefan Edberg, Frankie Dettorri, Charlton Heston, as well as the National Guard of Saudi Arabia, Sheikh Mohammed al Maktoum and the 1985 portrait of HM The Queen and Ronald Reagan at Windsor, this was presented to the President at the White House. In the 90s Terence concentrated on equestrian subjects, receiving commissions from many Hunts to paint retiring Masters of Foxhounds. Later came Racing commissions, among these were paintings of Derby Winners: Nashwan and Generous, Also Istabraq and Don’t Push It for J P McManus, Kauto Star for Clive Smith. Followed by a painting of Yeats and a series of works depicting the Queen’s visit to Coolmore Stud for Mr and Mrs J Magnier.

Terence regularly donates equestrian paintings for the Sir Peter O’Sullevan Charity in aid of animal and racing welfare work also for the Spinal Injuries Association and The Injured Jockeys Fund. 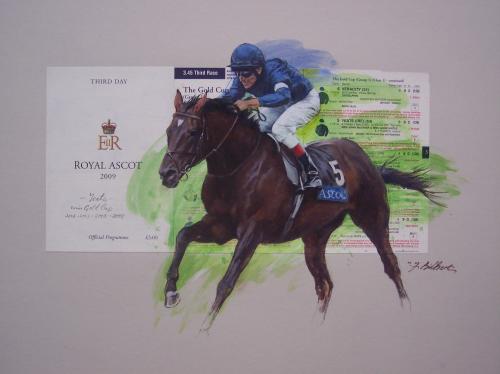