Susie Whitcombe HSEA is best known for her paintings of horses, but she paints other subjects with the same eye for detail.

Joseph Crawhall, Wilfred de Glehn and William Nicholson are among those who have influenced her work, the majority of which is in oil and watercolour. She has also produced a number of limited edition bronzes. 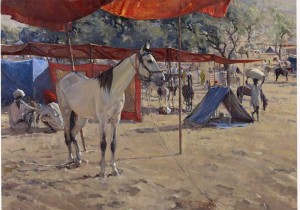