“One of the world’s greatest equestrian sculptors.” The Telegraph

“It is her immense grasp of the principals of movement, as well as her technique, which makes her work so sought after.” The Field

As a student at the R. A Schools Lorne Mckean won the Leverhulme scholarship, Silver medal for sculpture combined with architecture and The Feodora Gleichen scholarships.

Lorne’s fascination with the relationship of horse and man and the beauty and unity when they move as one, found its expression in the game of polo.

She has had many important Polo commissions including; The Queen’s personal Silver wedding present to HRH The Duke of Edinburgh and, 25 years later, a half life-size bronze for Guards polo club based on the same statue. Prince Charles on Pans Folly for Royal Worchester, Howard Hippward on Sage and recently Adolfo Cambiaso.

Dressage and racehorses are also among the many bronzes that Lorne has finished.

Whenever possible Lorne works from life as she finds direct contact with her subjects inspires enlivens and enlightens her work. The search for the essence of a subject has always had a magnetic attraction for her.

Many more of Lorne McKean’s Public sculptures and other bronzes can be seen on her web site. 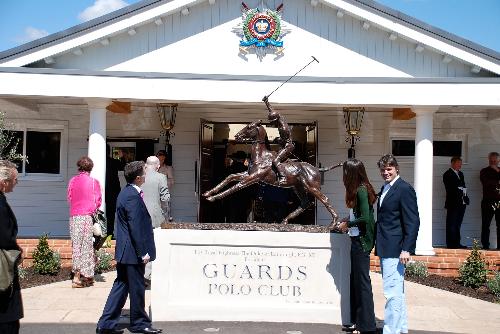