Barrie Linklater specialised in equine and human portraiture and a broad range of equestrian subjects, particularly racing scenes and free action studies of horses in oils and watercolour.

Since completing his training at Woolwich Polytechnic School of Art he has spent his entire life working with pencil and brush, first as a young illustrator in London studios, then four years of freelance work in Australia.He then returned to London to study and build a reputation for portrait and equestrian painting in the classic style where fine draughtmanship and sensitive composition skills are paramount.

His main commissions came from Her Majesty The Queen, HRH Duke of Edinburgh, The Committee of York Racecourse, Sir Michael Oswald, Sheik Ahmed-al-Maktoum, Queen’s Tennis Club and the City of London. Ascot Authority commissioned him to create the commemorative painting of that major landmark in racing history when Frankie Dettori won all seven races at the Ascot Festival. For the Golden Jubilee of Her Majesty the Queen he was commissioned by the Honourable Artillery Company to paint a major work, commemorating the Queen’s arrival by Gold Coach at St Paul’s for the Thanksgiving Service.

His first equestrian commission, uniquely, came from HRH Duke of Edinburgh in 1975 during a sitting with HRH for a portrait commissioned for the Welsh Guards. This commission, to present to Her Majesty The Queen, resulted in further commissions from Prince Philip and from owners of top class horses.

Barrie established himself as an international artist. His paintings are in America, Canada, Holland, Switzerland, Jersey, the Far East, Dubai and Australia. He has 13 paintings in the Royal Collection itself, with many watercolours and drawings in royal ownership.

His work has been exhibited at The National Portrait Gallery, the Royal Society of Portrait Painters, The Guildhall, the Patterson Gallery, Ackerman’s, Spinks and Tooth’s and was a long standing member of the Society of Equestrian Artists.

He was renowned for having a ready eye for the distinctive character of each horse, its beauty of form and movement, the light playing upon its coat and he also possessed the skills and sensitivity to express these many aspects in his paintings. Sadly Barrie passed away in March 2017. 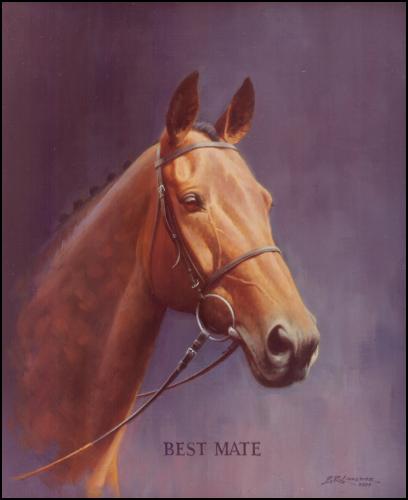