Caroline was brought up with horses, helping her parents on their small family stud farm breeding Thoroughbred race horses, and competed herself in Eventing to Advanced level, also show-jumping competing in the Foxhunter finals at the Horse of the Year Show at Wembley.

This daily contact and understanding of horses, how they react to situations, the invisible thread between the horse and rider, influenced her artistic direction.

She studied at Bath Academy of Art, followed by three years in Florence with the Internationally revered tutor Nerina Simi, receiving the Delta Metal Scholarship in her final year.

She has exhibited widely in solo and mixed exhibitions, winning the Graham North prize for the best hunting picture in 2008 and was invited to join the SEA as an Associate member in 2012. Painting mostly in oils, and sculpting in clay to cast in bronze, she aims to capture the characteristics and individuality of her

model. Much of her work is on commission.

Among commissions completed in bronze is a retrospective sculpture of Katchit, winner of the Champion Hurdle in 2008, and a bronze head of Clifton Promise, member of the bronze medal winning team for New Zealand in the London Olympics 2012, and winner of Badminton Horse Trials 2013. Caroline was also short-listed for a ½ size bronze of our Olympic gold medal winning Champion Valegro.

In painting she has completed many commissions, including a recent presentation picture of a retiring Joint-Master for the Berkeley Hunt, and provided a painting for the Beaufort Hunt Christmas card 2020. 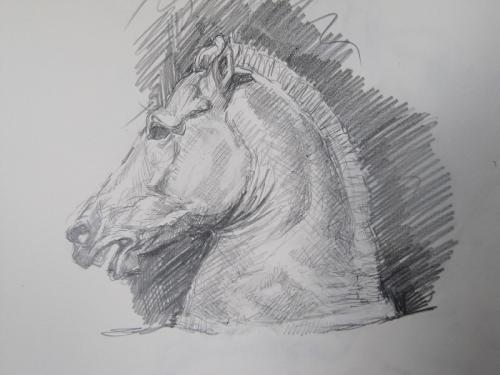